The Magical, Natural Beauty of the Black Woman.

Clean shaven, the black woman is stunning. She looks like a GODDESS. Other races might not pull it off. They might look as if they are suffering from cancer or are on chemotherapy.

With short hair, the black woman looks cute, clean and younger. Weaves and wigs always add age to a woman.

Sporting on AFRO, the black woman looks as if she has a “crown “on her head. She looks majestic like a Queen. In one TV show in Zimbabwe, one lady in the audience pointed out that. “We are the only ones whose hair point upwards towards heaven, everybody else ‘s hair points downwards”

After shampooing with natural rural plants “ruredzo”, the black woman’s hair becomes straight or wavy, just like the Caucasians and Asians. 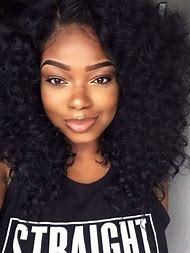 The black woman can plait her hair a thousand different styles. There is a mystique about it. 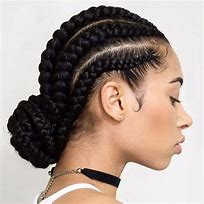 With locks, the black woman looks terribly sexy. Only a black woman can enjoy such locks.

It appears some black woman loathe their own hair and skin, preferring to wear weaves and wigs, which mimic Caucasians and Asians. They also bleach their skin to look like other races.Black people do not seem to realize, that different races look different because of their original habitat. The hair and skin of Caucasians is what it is because they come from cold climates. The nature, texture and length of their hair is to keep them warm in the cold climate. Black women wear the weaves and wigs on top of their natural hair. Often the weaves are worn for several weeks to several months. The end result is that, the scalp cannot breathe. There is accumulation of old sweat, dandruff and millions, billions, trillions and zillions of bacteria, resulting in aweful smells. There has been documentation of aweful, bacterial, fungal and parasitic scalp infections from wearing of weaves.

Whenever I meet a lady with natural hair and I get an opportunity to speak to her, be it in a plane, train, supermarket, etc., I always say, “Excuse me lady, I have to tell you that you are so beautiful, so stunning  with your natural hair. You see, I am a naturalist. I absolutely adore, respect and truly love and appreciate natural hair. When a black lady has natural hair, it means she has confidence within herself. She has inner and outer beauty. Natural hair is elegant, classy, and chic. It is a true sign of real sophistication. I hope you keep it up and I hope you share this with you friends”.

There is certainly no sophistication in paying for and wearing other people’s hair, dead people’s hair or synthetic fibers.

Addressing the Annual Conference of the National Association of Secondary School Heads, I emphasized the fact that headmasters and head mistresses and indeed parents have an awesome responsibility to instill confidence in the black child. The black girl must know that there is nothing wrong with her hair or skin. God/ Nature did not make a mistake. Infact, the black child was given the best hair and skin.

It was an embarrassing occasion for me because most of the headmistresses, if not all, had weaves and wigs. The black girl sees the mother, teacher and headmistress with weaves or wigs yet her own hair is different and natural. The child then starts to think and believe that there must be something wrong with herself. The black woman wearing weaves, might not be aware of the fact that they are inflicting untold psychological damage to the black child.  Even the black boys grow up, believing that the only beautiful black woman should have a weave or wig and should have bleached skin. We are callously destroying our future generations.

The Role of Black Man:

After addressing a group of women only, the ladies pointed it out to me, that they were not to blame but the black man. They made it clear to me that it is the black man who prefers ladies with long hair. The black man is the one who buy the weaves and wigs. When some black women go natural, the black men look for the girlfriends who wear wigs and weaves. When there are five black ladies, one is light in completion, and four are dark skinned, the majority of black men will go for the light skinned first. How do some black men spend nights sleeping next to a lady’s head which is covered by hair from some live or dead person from another continent, or covered by Chinese and Korean made synthetic  fibers soaked for several weeks in sweat and dandruff, dripping with bacteria, fungi and all sorts of organisms?

Various figures have been put forward as to the magnitude of the business. In 2014, Africans were reported to have spent 6-8 Million Unites States Dollars importing weaves and wigs. Today that figure is much more.

How can Africa, the poorest continent on earth afford to spend so much money on other races’ dirt when they themselves have the best hair of all races. Africa has desperate basic needs in education, health, sanitation etc. What kind of a mindset is this? Where are the political leaders? Where are the women leaders?

There is ample literature which confirms that the reasons some blacks try very hard to look like Caucasians (Hair and Skin) is the underlying inferiority complex, a result of slavery and colonization. Today in some parts of West Africa, pregnant women takes steroids to de-pigment the infants. They want to give birth to white babies, and not black babies who are considered ugly. It is common cause that the races’ from which black people buy human hair and synthetic fibers have no respect for black people, they even despise them. It is therefore difficult to understand how black people enrich races’ who are generally racist towards them.

If Africans and black people the world over, are to regain their confidence and rightful place, there need to be deliberately, coordinated efforts to educate black women, men and children as a matter of urgency. There is urgent need for ENLIGHTENMENT.

What People Are Saying On NISH Magazine